U.S. To Deploy New Weapon in Cyber War With China

PPPS (Washington)—Our sources at the Pentagon indicate the the U.S. may be about to deploy a new weapon in the escalating Cyber War with the Chinese government. Apparently, deployment is only waiting on President Obama's final approval.

Citizen Asks Tough Question of Most Transparent Administration In History, Gets Opaque Answer

PPPS (Littleton)—A citizen from California, Kira Davis, asked a probing question of President Obama yesterday about his 2008 promise of transparency, and got a decidedly muddled (some might say opaque) response. The President did point out, however, that his was "the most transparent administration in history."

Kira's question was part of the fourth annual Google Plus Fireside Hangout With President Obama, in which a few selected citizens get to interact with and pose questions of the President via video link online.

In her last question to the President, Ms. Davis asked how the President had been honoring his 2008 campaign promise to bring transparency to the White House, in light of certain recent examples to the contrary, including the administration's handling of the Benghazi incident.

The President pointed out to Ms. Davis that "This is the most transparent administration in history", and a short clip of this quote appeared last evening on Bret Baier's Fox News Special Report, and at online news sites (although those sites failed to identify the questioner as Ms. Davis).

The President went on to gently explain to Citizen Davis how national security issues sometimes affect transparency, and added:


"Benghazi, by the way is not a good example of that. That was largely driven by campaign stuff, because everything about that... we've had more testimony and more paper provided to Congress than ever before. And Congress is sort of running out of things to ask."

That response must have fully cleared up the Benghazi issue, because the moderator moved on to another citizen, without offering Citizen Davis an opportunity for a follow-up. Here is a video of Ms. Davis' question and the President's full response.


One of our loyal readers, Citizen Pete, who was monitoring the discussion live online, sent in his own follow-up question to the President, which he shared with PPPS.


Mr. President, first of all, I want to commend you on the restraint you used, and on the restraint of other officials in your administration, to successfully prevent what was clearly a bi-partisan issue of national security from becoming a partisan issue in the 2012 Presidential Campaign, as those on the far right and in the Tea Party wanted it to be. With your administration's focus on the more difficult problem of preventing the proliferation of insulting videos, you rose above partisan politics.

My question to you, sir, in light of the fact that on the evening of September 11, 2012, while the Benghazi Consulate was under attack, and the whereabouts of our Libyan Ambassador Chris Stevens was unaccounted for over a period of several hours, the American citizens still do not have an answer to this question: Where were YOU and what were you doing?

At the beginning of the Google+ Hangout (minute 2:52 in the full session video), Citizen Davis asked a question about gun control. She pointed out that FBI crime statistics clearly show that the vast majority of gun violence is committed with handguns, not assault rifles, and then asked if the President wanted to ban handguns.

The President responded by saying that he didn't want to ban handguns and that other programs he was proposing, such as increased background checks and other measures, would reduce gun violence, although he admitted that we could never do away with it completely. The President offered this more detailed goal:


"We're talking about making sure we're cracking down on straw purchases."

The President did not elaborate on whether he was proposing a new solution to "crack down" on straw gun purchases, or was planning to expand the existing government program nicknamed Fast and Furious.

We encourage our readers to view the entire enlightening question and answer session using this online link.

More information about Ms. Davis is available on her website and video channel.

Breaking: Could Kira Davis be an Administration plant?

It should be noted that there are some who question whether "so called" citizens who appear in video conferences or townhall meetings with the President could in fact be government employees or campaign workers placed there by the administration.

Our crack team of PPPS researchers has uncovered this official video from one year ago which suggests that "Citizen" Kira Davis may work for the U.S. State Department. Check back for updates as we continue to investigate this matter.

PPPS (Washington)—The Pundit Pete Press Service is proud to announce the pending release of a  new book which the mainstream media elite won't want you to read. 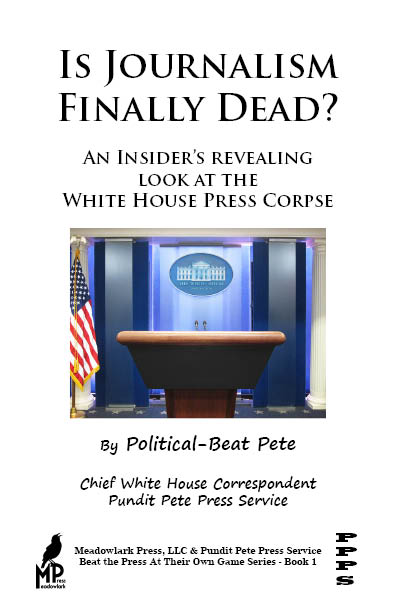 Is Journalism Finally Dead? was written by our own Chief White House Correspondent, Political-Beat Pete, and published by the PPPS in conjunction with Meadowlark Press.

Pre-release sales put the book near the top of the New York Times Best-Seller List just two weeks ago, until it was mysteriously de-listed.

See what others are saying about Is Journalism Finally Dead? - An Insider's Revealing Look at the White House Press Corpse.

New 2-26-13 “Pete's book has awakened me to get back in the game and speak truth to power.” —Bob Woodward, Washington Post

“With this book, I think Pete may be rendering a great service to our profession. Just don’t tell him I said that.” —Chris Wallace, Fox News Sunday

“I’m actually quite shocked that Pete would write such a disturbing piece of fiction. Until now, I never suspected him of being racist.” —Andrea Mitchel, NBC News Chief Foreign Affairs Correspondent

New 2-25-13 “I'm saddened to see Pete fall for the Myth of anti-conservative bias in the Mainstream Media, though I'm honored he devoted an entire chapter to me.” —Chuck Todd, Chief White House Correspondent, NBC News

“With his first book, Pete has driven a stake straight through the heart of the Media Elite.” —Tucker Carlson, The Daily Caller

“Pete is someone I really look up to at the Press Service. Too bad he’ll lose his press credentials because of this book.” —Protester Pete, PPPS Junior Reporter 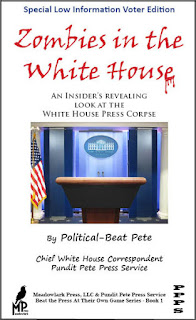 Zombies in the White House


Check back for Updates and Exclusive Chapter Excerpts in the coming weeks.

Several members of the press are making the outrageous claim that Is Journalism Finally Dead? is Not a Real Book.

But the book is about people who are Not Real Journalists. And that is the point!

Obama is crushing the media just like the Soviet Union did
— Mark Steyn audio from Hugh Hewitt show link at Daily Caller, February 21, 2013

PPPS (New Orleans)—Controversy has been swirling around an advertisement which aired yesterday during the Black Out Bowl in New Orleans, with some calling the ad racist.

The offending Volkswagen ad depicted "white folks" speaking with a distinctive Jamaican accent while celebrating a positive outlook on life. A number of media consultants and diversity issues experts found the advertisement to be highly offensive and borderline racist in nature.

We advise our readers to exercise caution while viewing the ad, particularly those who have had sensitivity training or were educated at a liberal arts university, and are white (Minnesotans may be particularly offended). Here is the ad.


We asked our own PPPS Minority and Diversity Issues Editor, Pigment-Challenged Pete, whether, after viewing the VW ad, he thought it was racist. His response, "Yah mahn, it be definitely so".

In the interest of fair and balanced reporting, we did find some people who were not offended by the advertisement, including the entire population of the island nation of Jamaica.

Today, the Jamaican government issued this official video response, directed to those who say the VW ad is racist.

Important Disclaimer: In the interest of full disclosure, we formally state that PPPS has received no compensation or advertising revenue in connection with this news story from Volkswagen America Inc., Volkswagen Jamaica Ltd, or from the Jamaican Government. But, we still have hope.


PPPS (Camp David)—We received this official photograph from the White House today, and as dutiful members of the White House Press Corpse, we decided to pass it on (with only a slight embellishment).

This official White House photograph is being made available only for publication by news organizations and/or for personal use printing by the subject(s) of the photograph. The photograph may not be manipulated in any way and may not be used in commercial or political materials, advertisements, emails, products, promotions that in any way suggests approval or endorsement of the President, the First Family, or the White House.

Official PPPS response: Not much chance this post will be interpreted as an endorsement. Still waiting for that "Official" photograph from the Situation Room on the evening of September 11, 2012 during the Benghazi attack.
No comments: