PPPS (Littleton)—The Pundit Pete Press Service is expanding our media empire to include the creation and marketing of t-shirt designs.

Our first shirt design commemorates our journalism colleagues and should be available for purchase soon.

Look for our new Journalistic Yoga shirt for women soon.

UPDATE: As promised, here is the Journalistic Yoga design. This shirt celebrates this popular practice among many journalists.

Summer Musings & The Start of a Movement?

PPPS (Littleton)—Some random thoughts and observations which arise on occasion during the summer months, possibly due to heat stroke. We'll add to this post as things arise.

Those on both the right and the left claim to know either that voter fraud is rampant or nonexistent. But if no one needs an ID to register or to vote, how would we know? I mean, how do you check that sort of thing? Perhaps it's the perfect issue on which to hold a debate, where each side can just make up facts, but there is no way to check them........mmm......I like it.

At the annual Pundit Pete Press Service Company Picnic in the Park, the assembled journalists and invited Tea Party radicals, perhaps a bit under the influence of the refreshments, and sparked by a lively discussion of the political issues of the day, spontaneously began to chant:


POWER TO THE PETEPLE!
No comments:

A Prayer for the People of Aurora, Colorado

Lord, we pray for comfort and strength for those families facing unimaginable grief this morning. Surround them with your love and bring angels to their aid.

Lord, we pray for those in the hospital and their families and friends. Bring courage and hope and your healing touch.

Lord, we pray for the medical staff. Guide their hands this day.

Lord, we pray for the police and paramedics and other first responders. Guide them as they do their jobs, help them to protect and assist their community, and protect them from recrimination and trauma.

Lord, strengthen and guide the clergy and members of faith communities. Give them the words to say and direct them as they help others in the Aurora community.

Lord, we pray for healing for the Aurora community. And we stand with them against further evil - the evil that works to divide, to bring greater pain, to destroy hope, to inflame anger in situations like this.

In the name of Jesus Christ, we say no more to evil. You have no power here, you may not interfere. We stand together with our friends in Aurora, and love shall prevail.

PPPS (Littleton)—In a surprising speech in Roanoke, VA last Friday President Obama revealed the truth about the nature of business and our economy and why his plans to increase the government are so essential to his reelection economic growth.


The President said, "If you've got a business, you didn't build that. Somebody else made that happen." And of course, by somebody else, he meant the government.

At the Pundit Pete Press Service, we agree with the President. It's fair to say that we owe most of our success, and the fact that we have become a nationally known and influential news source, to the Obama administration, and the government programs and pronouncements that are so often the subject of our news stories.


Without the Obama administration, and friends of the administration like Speaker Pelosi, or Harry Reid, just where would we go for source material to operate our business? Ms. Pelosi, Mr. Reid and Mr. Obama supplied the very inspiration that started Pundit Pete in his pundit career.

Perhaps it's no secret that the main stock in trade for PPPS is satire.  And even though at times we just make stuff up, there is still a need for raw material; for inspiration to create and embellish upon existing news. There is no better source to meet our needs than that supplied by government: local, state or national, all are essential to the business of satire.  But until the Obama administration came along to help, there just was not enough material to go around, and certainly not enough to fuel a start up business like PPPS. So here's to you Mr. President. You've hit the nail on the head and we are eternally grateful.

And apparently, we are not alone as a business in benefiting from the work of others, particularly the government.

As Citizen Caryn indicated, "Without the worry that woke me in the middle of night last November, the worry about what our government was doing to the citizens, why I would never have received that idea of posting messages on a bridge, not in a million years. And even now, it is government that inspires me to post my Western Bluebird blog." 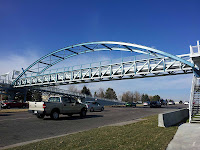 And Citizen Pete took it even further in his thanks for the government help. "Look if "free" federal money had not been available to our county officials to spend, they would never have decided to build that useless pedestrian bridge we call the Bridge to Nowhere. Then where would we be? Why out in the cold with no place to hang a sign."

Citizen Pete, not one to shy from conversation once engaged, continued "We owe the very existence of our Bridge to Nowhere Tea Party to government assistance: for motivation, for inspiration in creating messages, and for our national exposure through blogs, talk radio, and through other Tea Party groups and organizations, who are all equally inspired and motivated by the government that helps them. Without government, and especially the current administration, I don't even think we would have a Tea Party, any Tea Party, anywhere."

At this point, Pete choked up, and with tears streaming down his face, haltingly added,  "I don't know how to say it........I mean.......you just can't put into words how appreciative we are of the help we've gotten." Unable to continue, Pete directed us to this letter to explain how he felt.
2 comments:

PPPS (Littleton)—Apparently, the speech that GOP Presidential Candidate Mitt Romney gave to the NAACP in Houston has created a stir in the political world, and perhaps a bit of controversy.

During his speech, Romney was booed by the otherwise polite and welcoming NAACP crowd when he mentioned and then criticized President Obama's health care plan, which Romney referred to using the controversial label "Obamacare." Many on both the right and the left initially characterized Romney as courageous for broaching this somewhat sensitive subject and for standing on principle in the face of a less-than-supportive audience.

However, PPPS has learned of another story beneath the story, which paints an entirely different—and somewhat disturbing—picture of the Romney speech and his reference to "Obamacare." In fact, this new information has caused us to question the very character of this man seeking the highest office in the land. This back story was revealed by an honorable and objective politician former Speaker of the House Nancy Pelosi.

Ms. Pelosi, no stranger to partisan political attacks from those who oppose the idea of women in high office (part of the GOP's  "War on Women"), deftly identified the true motivation behind the Romney speech.

“I think it was a calculated move on his part to get booed at the NAACP convention,” Pelosi told Bloomberg Television's Peter Cook.

Ms. Pelosi's comment is both astonishing and disturbing.The idea that a politician, especially a nationally known leader in the party, would stoop so low as to manipulate an unsuspecting crowd into booing or otherwise expressing negative reactions is shocking. The possibility that he would do it for the sole purpose of creating a photo op or for some other political advantage is truly outrageous and a sad commentary on the state of partisan politics in our nation today.

We know readers will want to understand the insight and honesty expressed in Speaker Pelosi's statement, so we thought it best to post a video of Pelosi herself. Our readers can judge for themselves.


Trackback: On Mitt Romney and the NAACP - A Citizen Speaks

Correction: Apparently we posted the wrong video of Speaker Pelosi. We've asked our technician, Projectionist Pete to correct that.

Newsflash Update: Romney now accused of purposely manipulating NAACP audience to elicit a standing ovation at end of his speech, which he was invited to give, for the purpose of influencing independent voters.

On Mitt Romney and the NAACP - A Citizen Speaks

I recently watched Mitt Romney's speech to the NAACP.

As Mitt Romney spoke, his true character was revealed, and for the audience, the color of his skin and his party affiliation faded to the background.

Barrack Obama, who embraces the race card but has abandoned the black community with his economic policies, chose not to speak, and thus revealed much about his character, as well.

Perhaps one day, the NAACP will drop the race card, and embrace a policy more like this: 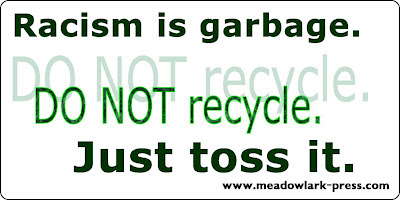 I don't hold out quite as much hope for Mr. Obama, or his chief spokesman on all things colored, Mr. Holder.......but miracles can happen.