This post is dedicated to all of the grassroots volunteers and delegates who we met at the Colorado GOP Convention on April 9, 2016 from all over the great State of Colorado.

These are our friends and fellow grassroots activists, Tea Party members and long-time Republicans, county chairs and first-time caucus attendees, young and old, very conservative and not-as-conservative, all gathered together to move our country forward, select senate candidates for the June primary election, and to elect delegates to the GOP National Convention, who will help to select our next president.

These are the Patriotic Americans that the Donald Trump Campaign compared to Nazis, using Gestapo tactics.

These are the delegates that Donald Trump totally ignored until a week before the convention.

This is the crowd who would have loved to hear a Trump speech, even if a majority were supporting his opponent, Senator Ted Cruz.

But Donald Trump couldn't be bothered to show up.

Instead, after he lost all of the Colorado delegates to Senator Ted Cruz,  the Donald directed his staff and supporters to whine, and to make false accusations about a delegate selection process he didn't bother to understand, or choose to participate in.

This week, Trump was back in New York, among the people who share his values, complaining that the whole Colorado delegate selection process was a "totally corrupt rigged system" designed by the GOP establishment to prevent him from attaining his Trump-Given Right to be nominated for president.

Well, I've got some news for you Mr. Trump, and for all of the media and pundits who bought into your bogus narrative. It's going to backfire, big time.

You see, Colorado politics and the process of selecting candidates and delegates is all about showing up, starting at your local precinct caucus (held on March 1). It's a truly grassroots process, and it's been done that way for over 100 years.

Anyone, and I mean ANYONE, who is registered Republican, can show up and be part of a local precinct caucus. A precinct is the smallest political delineation for elections and holding party meetings. In an urban area it might encompass several blocks, basically your larger neighborhood. In rural Colorado it might include all or a large portion of a county. Typically, a precinct contains a few to several hundred GOP voters.

Anyone, and I mean ANYONE, can be selected by their fellow caucus attendees to be a delegate to their county and congressional district assemblies, and yes, even to the state GOP convention. Anyone. It was estimated that about 40 percent of the over 4,000 delegates and alternates at this year's convention were new to the process.  Some of them drove six or more hours to get there, and stayed in motels at their own expense.

And here is the little-known fact that all the pundits and press have failed to report:

Anyone, and I mean ANYONE, who is a registered Republican, could have filled out a form and been listed as a delegate to the National GOP Convention. Anyone. You didn't even have to attend your caucus - the form was posted online at your state or county GOP website. On that form you had to designate either that you were supporting a particular candidate or were running as un-pledged. Most listed themselves as un-pledged.

That is precisely why there were over 600 national delegate candidates listed at the state convention, and about an equal number of candidates combined at the seven congressional district assemblies. Out of that thousand or so candidates, only 13 would be selected at the state convention, and 21 at the congressional assemblies (3 each), plus an equal number of alternate delegates, to go to the national convention in Cleveland. Add the Colorado GOP Chairman, and one man and one woman delegate to the RNC, and you have the total of 37 delegates frequently mentioned in the press.

Note that, only one, let me repeat that, ONLY ONE out of that 37 is part of the GOP establishment, the Colorado GOP Chairman, Steve House. All of the others were elected in a process that began with electing delegates to the state convention and the congressional district meetings at the local precinct caucuses. Delegates were also selected to attend county assemblies where candidates for local office, and the state legislature are selected through votes.

That is grassroots, baby. No other way to describe it.

Unless you are the Donald. Then you describe it as the party establishment disenfranchising potential Trump delegates. Give me a break.

If any potential Trump voters were "disenfranchised", it was because of the failure of the Trump Team to reach out and educate their supporters about the process of electing delegates. No one told them to show up. Or maybe there just aren't that many Trump supporters in Colorado. Out of 22 people at my own caucus, not one supported Trump.

However, somehow, all those Cruz supporters managed to figure things out. The grassroots activists know who the real conservative running for president is, and they came out to support him and all of the other patriotic candidates up and down the line in Colorado. That is the real story.

Oh, and here is a message for Mr. Trump. Maybe you hadn't heard, but Colorado is a critical swing state. This fall, just who do you think is going to be out there making phone calls for you, walking precincts for you, calling into radio shows, and donating money, if you get the GOP nomination?  Maybe your admiring followers will be doing all that work for you - the same people who couldn't figure out the delegate process.

But, it sure ain't gonna be the tea party activists and the stalwart Republicans who put on the caucuses, who stepped up to be delegates, who drove hundreds of miles to attend the convention. Unless you forget, those are all the hardworking people who your campaign just likened to Nazis. Good luck with that.

What a dumbass lying loser you are Mr. Trump.


A message from one of the Delegates I proudly helped elect to represent us in Cleveland, Kristi Burton Brown.

Setting the message straight about Colorado's Republican caucus - An article by my friend, and first-time convention attendee, Ari Armstrong

The Colorado caucus system works, get over it - A great article by another convention attendee, Kevin Hotaling

Donald Trump Laid a Colorado Goose Egg Because He Was Disorganized and Amateurish - by Mark Antonio Wright, National Review

Will He Use Trumped-Up Colorado Lies as Excuse for Third-Party Run? - by Joy Overbeck, friend, fellow convention attendee, and Townhall.com contributor.

Trump has it All Wrong, it's Lying Don - by Dan Spencer at RedState

How Cruz won all the Colorado delegates - by Derrick Wilburn, friend and Colorado GOP Vice-Chairman (see pic above), in American Thinker

Colorado's Results Were a Victory for the Conservative Grassroots - National Review article by Laura Carno, GOP Convention attendee and author of Government Ruins Nearly Everything

How Ted Cruz could win Colorado's delegates even before the convention - by Corey Hutchins, Colorado Independent 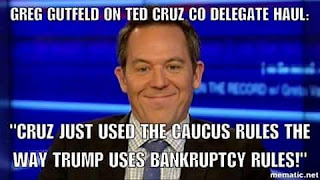 Update April 24, 2016: Disenfranchised in Colorado? Or Just Not Making An Effort? - by Average Matt, an average guy's experience at a Colorado caucus

Update May 1, 2016: How I got to be a Delegate from Wyoming to the Republican National Convention - by Jeff Hymas in American Thinker