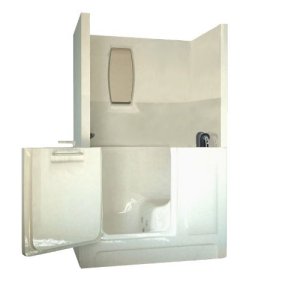 PPPS (Washington, DC)—From unnamed sources in both the White House and the Office of President-Elect Joe Biden, PPPS has learned that at least one very important Transition Team request has been denied.

Apparently, in the wake of President-Elect Biden's recent foot injury incurred while playing with the Soon-To-Be First Dog, the Biden transition team has requested that senior-safe, walk-in tub-showers be installed in the White House private residence, adjacent to the Oval Office, and in the female Secret Service detail locker room. The lame-duck White House transition team has apparently denied this important safety request.

PPPS (Philadelphia)—Our fearless leader, Pundit Pete, who is on vacation in the City of Brotherly Love, will be posting some random thought on Election Fraud. 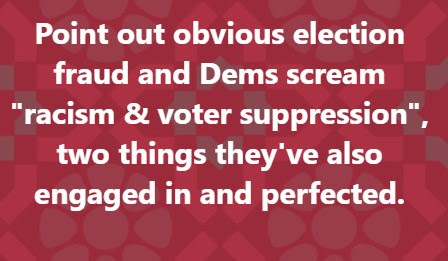 PPPS (Littleton)—It's now up to We the People whether we will keep our Republic. 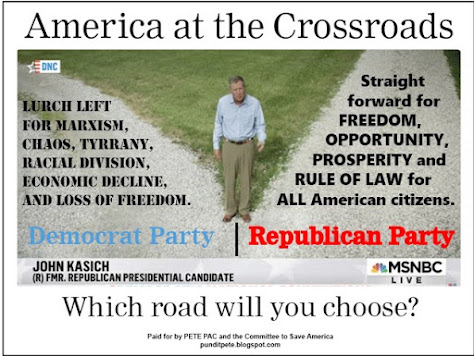 Labels: 2020 Election, A Republic If You Can Keep It

Did Biden Steal a Page From the Clinton Playbook?

PPPS (New York City)—Unnamed sources cultivated by PPPS within the FBI and Department of Justice have revealed that there was an unpublished manuscript and book proposal on the hard disk of a laptop left by Hunter Biden at a Delaware computer repair shop.

PPPS has obtained an exclusive copy of the manuscript, along with this proposed cover for the book. 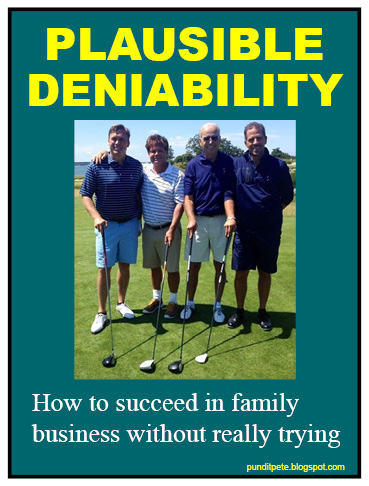 In our initial review of the book manuscript, PPPS investigators discovered a number of passages which bore a remarkable resemblance to passages included in a similar guide to business success written and published by fellow Democrats, Bill and Hillary Clinton in their New York Times best seller book titled DEAD BROKE NO MORE. You may recall their book from it's famous cover. 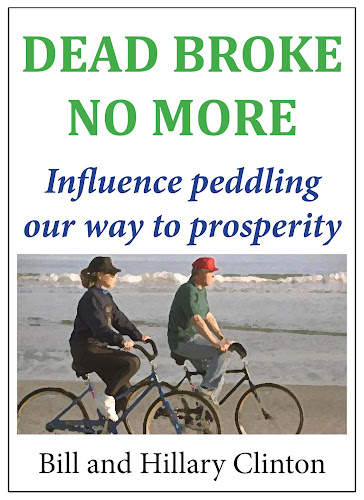 Is There a Biden Privilege?

PPPS (Kiev)—Given the recent news coverage, or lack thereof, we are beginning to wonder if our future President, Joe Biden, and his family, including his son Hunter Biden, may not enjoy certain privileges that the rest of us do not.

While researching this question, a difficult task because many links to the Biden family kept disappearing, we came across this graphic located on the hard drive of a laptop mysteriously left at the PPPS headquarters some months ago. Our IT guy, Platte River Pete was about to strip the laptop of valuable recyclables when he realized that the initials HB etched onto the back of laptop could have some bearing on the Biden family research. At that point, he handed the laptop over to our chief investigative reporter, Poirot Pete.

This is just one of many graphic images that Pete found on the laptop. 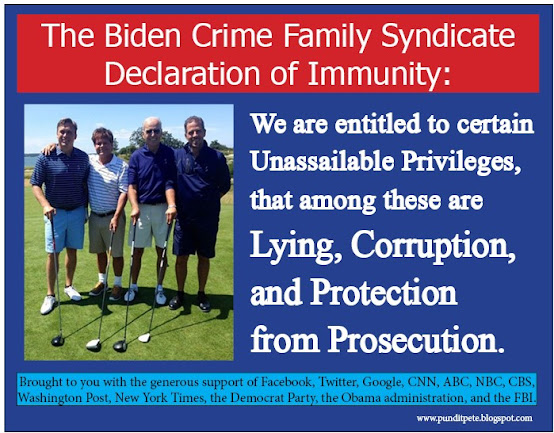 Editor's Disclaimer: PPPS, its employees and affiliates, are not responsible for the contents of random laptops left on our premises. Furthermore, if pressed on this issue, we will arrange for Facebook, Google and Twitter to eliminate all references, links and follow-up articles connected to this post. If further pressed, we will turn over the subject laptop, and all of its contents, to an appropriate trustworthy and independent authority such as the Democrat Party or the FBI.
No comments:

PPPS (Kiev)—With the recent revelations posted in the New York Post about emails recovered from a laptop once owned by Hunter Biden, we thought it appropriate to repost a poem by our Poet-In-Residence, Poet Pete. 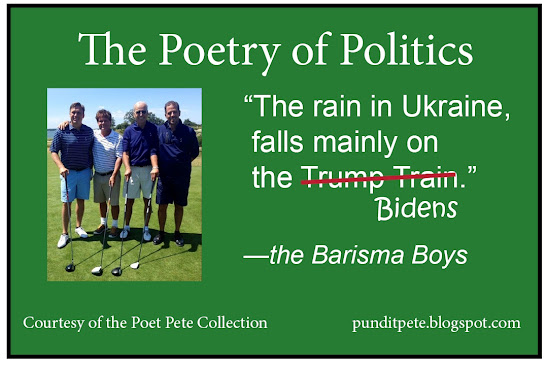 NOTE: We are experiencing technical difficulties.  We are having trouble getting the link to the New York Post article to work.  Mmm....maybe if we use headline size, it will fool the censors.

Big Tech is in the tank for Biden, Democrats: Devine

PPPS (Washington DC and Moscow)—After much deliberation, we've come to the conclusion that our country is in a bit of turmoil. Therefore, at the direction of our dear leader and mentor, Pundit Pete, we are releasing the following PUBLIC SERVICE ANNOUNCEMENT.  —the staff. 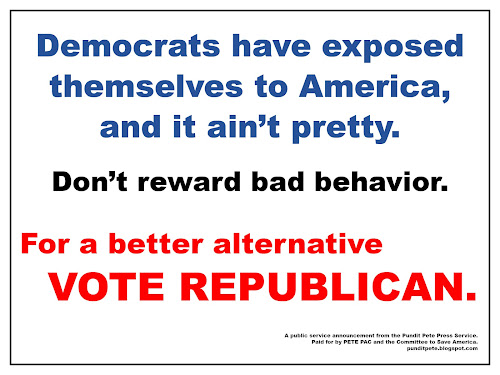 Note: In the interest of full disclosure, we were paid for our deliberation and conclusion by an organization called PETE PAC, along with a grant from the Committee to Save America. We disavow any knowledge of offshore funding associated with either group, or any direct ties to RUSSIA.

Recognizing that most of our readers are low-information voters and unlikely to watch the convention. Pete chose to simplify the Democrat Party message and juxtapose their positions against those of the Republican Party, in order to present our readers with a clear choice in November. Here is what he came up with. H/T to John Kasich for the idea. 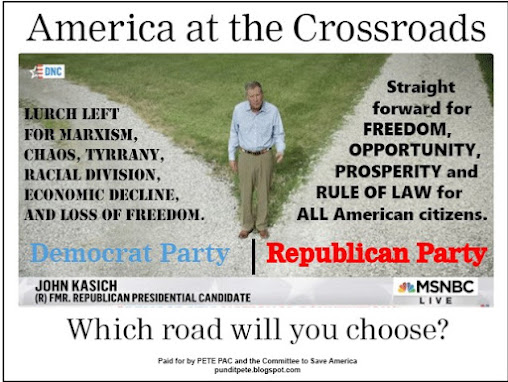 Post comments on what choice you will make in November.

Keep it clean - Pious Pete will be monitoring.

Racism is garbage message on a mug.

PPPS(Littleton)—A message on a mug is taking the country by surprise. 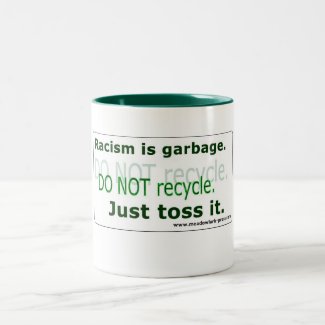 Our PPPS readers may recognize this message, created by loyal reader and sometimes contributor, Citizen Caryn.

Caryn tells us you can buy this coffee mug and share with friends to help overcome both racism, and the race-card carrying industry. Plus, it makes people think. Pundit Pete has personally carried a sign with this message in Denver's annual MLK Day Parade, and everyone loves it. 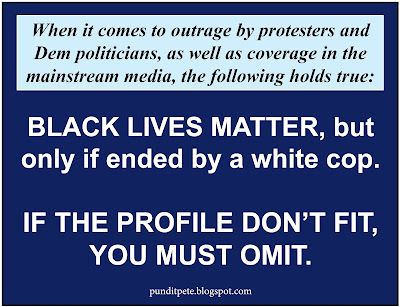 PPPS (Minneapolis) —An observation from our Editor-In-Chief, Pundit Pete.

Pete's Plan to Save America

PPPS (Littleton) —With our country facing increasing economic hardship, dangerous anarchy, and loss of both civil discourse and civil liberties, our Editor-in-Chief, Pundit Pete, has boiled our problems down to one consistent cause and one simple solution to Save America. 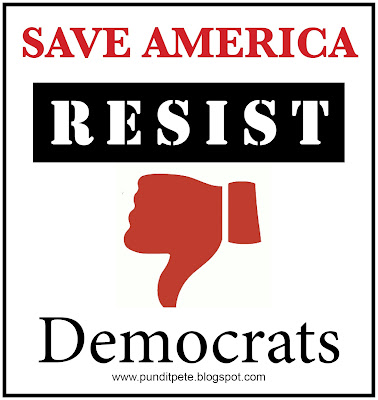 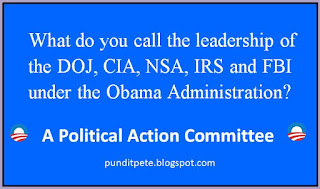 PPPS (Washington, DC)—With the press and Democrats in our nation's capitol trying to contain the recent outbreak of transcript fever, we thought it would help if we assigned a name to the causal virus. 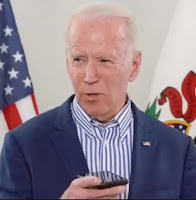 PPPS (Chicago)—In an Illinois Video Town Hall yesterday, Presidential Candidate Joe Biden claimed to have sponsored the Endangered Species Act early in his senate career, which began in 1973 as the junior Senator from Delaware.

The only successful caller to the town hall, which only lasted 4 ½ minutes due to technical difficulties, posed this two-part question:
"Do you support the Endangered Species Act, and will you prohibit animals from being brought into this country for trophies?"

He then went on to assert that "One of the things I did early on in my career as a U.S. senator was, I was one of the sponsors of the Endangered Species Act."

The Endangered Species Act originated in the U.S. Senate in June of 1973, was eventually passed by both houses and signed by President Nixon later that year.  The original senate bill (S. 1983) was sponsored by Senator Harrison Williams, Jr. of New Jersey. The bill had eight cosponsors, including the senior senator from Delaware at the time, Republican William Roth, Jr.

Senator Joe Biden was neither a sponsor, nor a cosponsor of the Endangered Species Act. Period.

In fact, a review Senator Biden's legislative record indicates that he was seldom a sponsor or cosponsor on environmental legislation, compared to his other areas of interest.

Of the 1,071 bills he sponsored over his career in the Senate spanning 1973 through 2006, only 10 were related to environmental protection, and none included endangered species in the title.

Of the 3,374 bills Senator Biden cosponsored, only 58 were related to environmental protection, and of those, only one was related to endangered species. That was S. 675, entered in 1987 as "Authorization for Appropriations for the Endangered Species Act of 1973". There were 47 cosponsors on the bill, Senator Joe Biden and the Republican Senator from Delaware, among them.

As a senator for more than three decades, Joe Biden certainly understands the difference between the terms sponsor and a cosponsor on a bill. For him to claim to be a sponsor of Endangered Species Act in 1973, early in his senate career, is false. His listing as a cosponsor on an appropriations bill fourteen years later also fails to meet the "sponsor" claim he made.

Joe Biden makes stuff up. And, as evidenced by the Illinois Town Hall video (and numerous other examples), he and his team were incapable of conducting a simple and coherent video town hall exercise, something many politicians regularly do on Facebook or other venues. This man and his team, SHOULD NOT be elected to the office of president of this great country.

You can watch the video, posted on a Biden campaign Facebook page, check the links we have provided, and make up your own mind.

Editor's Note: As a satire blog, we normally are proud to make up fake news for our readers' entertainment, and unlike most of the mainstream media, we readily admit it. There are instances, however, where the actions of some politicians (Democrats mostly) are so outrageous that literally, we could not make this stuff up. This is one of those instances. With that said, we are obliged to offer up this content warning to indicate that the preceding quotes, video link,  investigative journalism, and fact checking are all real. Don't be fooled.
THIS IS NOT SATIRE.

BREAKING: Mayor Pete Out, Bloomberg on the Rise

PPPS (Washington, DC)—It is with great sadness that the Pundit Pete Press Service must report that Mayor Pete Boot-Edge-Edge has ended his historic campaign for president. As the first Pete to ever run for that high office, he had the nearly unanimous support of the staff here at PPPS.

Now, based upon careful consideration of the qualifications of the other Democrat Party candidates, with an emphasis on business experience and acumen, the staff at PPPS, many of whom have applied for super delegate appointments to the Democrat National Convention, are now proud to lend their endorsement to another former mayor, Michael Bloomberg. 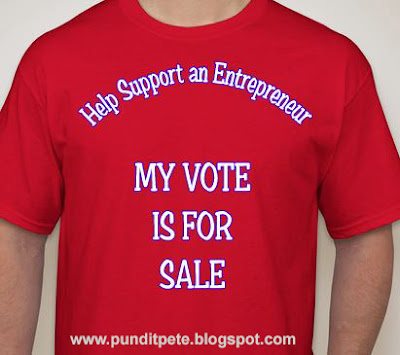 It is the PPPS staff consensus that Mayor Bloomberg best represents the entrepreneurial spirit so prevalent in the Democrat Party. Our staff have even printed up special t-shirts to wear at the Democrat National Convention in Milwaukee.

PPPS (Des Moines)—With the nation still breathlessly awaiting the results from the Iowa Democratic Caucus, the Iowa Democrat Caucus Committee has finally released a formal explanation for the delay.

FINAL RESULTS TO BE RELEASED SOON

The Poetry of Impeachment

PPPS (Washington, DC)—Our Poet-In-Residence, Poet Pete, was so moved by the impeachment process that he decided to publish this poem. 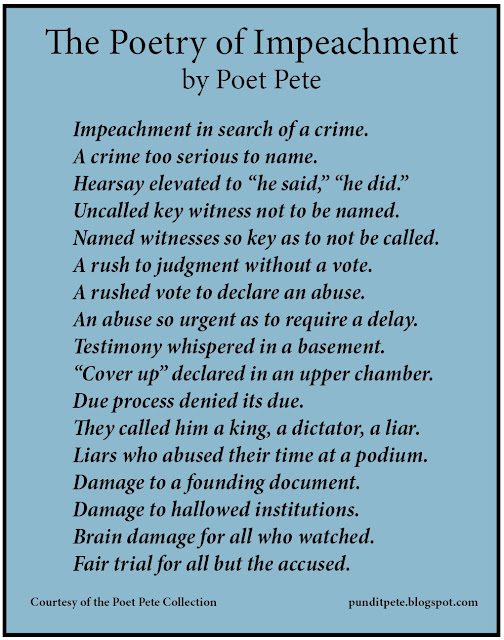