In the interest of complete transparency, we have attempted to produce a complete and comprehensive set of all emails between Joey Bunch, Peter Boddie and Caryn Boddie under the subject heading: Dianna DeGette Debate.

This subject heading refers to a previous news article by Mr. Bunch which included a one-sentence reference to Casper Stockham, Republican Candidate for the U.S. House of Representatives in Colorado's 1st Congressional District (Denver and South Jeffco). Other emails dealing with Yoga Routines, Wedding Plans, or otherwise sensitive or confidential subjects have been deleted or heavily redacted.

There are (at this time) two distinct email threads, the Joey/Pete Thread, and the Joey/Caryn Thread. Due to file size, each thread has been broken up into multiple JPEG files, presented sequentially.

Important links central to these discussions include:

THE EMAILS - JOEY/PETE THREAD (click to enlarge and read) 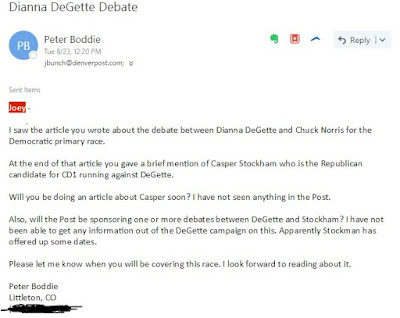 The referenced article is about a June debate between Rep. Dianna DeGette and primary opponent Chuck Norris. I (Citizen Pete) was there, as was Casper Stockham. I am also pretty certain I met Joe Bunch there, and I'm also pretty sure Joey met Casper. Casper would have certainly 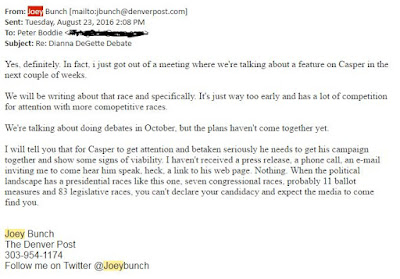 "You can't declare your candidacy and expect the media to come find you."

This, by the way, was one year after Casper declared his candidacy, and after numerous contacts with another Denver Post political reporter, John Frank, in which Casper asked for coverage. 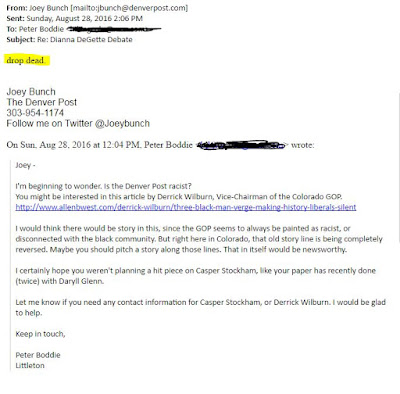 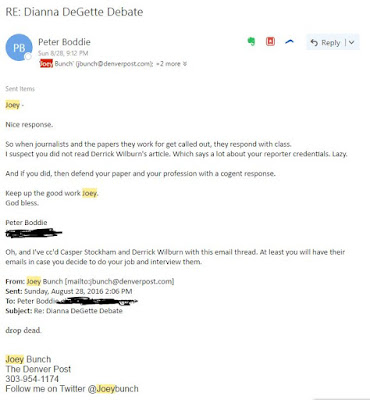 The Caryn and Joey Emails, in which Citizen Caryn defends her husband and Joey calls Pete "loathsome". (coming soon)

UPDATE: Citizen Caryn has asked that we not include her emails at this time. This whole sordid affair has been pretty upsetting.