PPPS (Washington & Denver) In a breaking story this morning, White House Press Secretary Jay Carney announced that President Obama has negotiated, and is about to accept, a $50 trillion private donation intended to forestall an impending U.S. government default and to solve the nation's debt problem through at least November, 2012. Rumors are circulating as to the identity of the donor, who wishes to remain anonymous.

Our own PPPS crack team of researchers and reporters, however, have identified the donor as Philanthropist Pete, an international financier, currency trader, and media mogul, whose generosity is well known in arts and charity circles around the world. Through secret contacts inside of Philanthropist Pete's international headquarters in Denver we have verified the $50 trillion amount and obtained a photocopy of the actual note to be turned over to the U.S. Treasury Department. 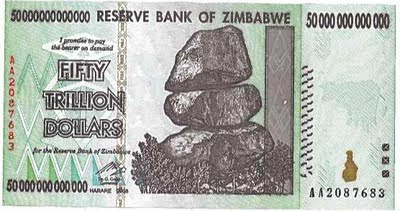 Treasury Secretary Timothy Giethner is reported to be on route to Denver aboard one of Pete's private corporate jets to receive the payment.

Press Secretary Jay Carney would neither officially deny nor confirm the donor's identity and has provided few additional details regarding this surprising announcement, other than to indicate that President Obama will be addressing the nation later in the week regarding the donation, and the unveiling of a new White House proposal for investments in our nation's future.

Unofficially, contacts inside the White House have confirmed that negotiations with the anonymous donor had been ongoing for some weeks, and that in order to avoid press scrutiny and criticism, had been billed as campaign fundraising events and golf outings. A number of the President's out-of-town trips on Air Force One, and a least one cancellation of talks with House Republican leaders, were apparently related to these secret donor negotiations.

In addition, both the apparent inaction by Democrats on the debt ceiling crisis, and Obama's hardline but conciliatory stance involving negotiations with Republicans, now appear to have been skillful maneuvers to delay until this ultimate solution to the debt crisis could be reached. Our hats are off to the President on this one, and our nation is forever indebted to the generosity of the "anonymous" donor.

In an unrelated story, Press Secretary Carney indicated today that Fox News' White House press credentials have been temporarily suspended in light of the controversy surrounding News Corporation's scandalous operations in the UK, and owner Rupert Murdock's questionable journalistic integrity.  We are proud to announce that our own White House correspondent, Political Beat Pete, has been promoted from the if-available seating at the back of the press conference room, to the spot formerly occupied by Fox News in the front row.

PPPS Note: In the spirit of full disclosure, we are forced to divulge that Philanthropist Pete recently purchased a controlling interest the Pundit Pete Press Service. We reiterate here that this financial connection has no bearing whatsoever on the editorial content or nature of stories covered and reported by the PPPS. We remain true to our high standards of reporting and immune to any influence from ownership interests.