PPPS (Washington) As our nation struggles under the strain of high unemployment, economic stagnation and crushing debt, it is a rare day when we get to report on good news emerging from our nation's capitol. Rarer still is the opportunity to report that two previously antagonistic factions, the White House and the Tea Party, have come together in agreement on an important issue of the day - making it easier to do business in America.

First, there is the President's sweeping proposal, unveiled just last week (Jan 13), to simplify and streamline how a business can access information and resources available from the federal government.

We are reminded of the example of how one small business, Solyndra, an up-and-coming green energy company, had encountered great difficulty in getting started due to the maze of bureaucracy and decision-making obstacles imposed by the previous Bush administration. After months of frustration, and in desperation, Solyndra found it necessary to contact the new White House administration in order to obtain a simple loan guarantee.

While we find it admirable that the President and White House staff were able to cut through red tape and quickly direct the engine of government to assist a struggling business like Solyndra, we recognize that the President's time is just too valuable to be regularly diverted to solving individual problems of this nature. Therefore, we commend the President and the White House staff for recognizing the problem, and for engineering a solution, to make it easier to do business in America.

Following is a graphic, provided by the White House, which illustrates how the business of government, previously an impediment to private sector growth, can be directed to more efficiently assist in the business of doing business in America. All that is left is for Congress to grant the President the unchecked power to reorganize this and all other elements of government, to better assist the American people. 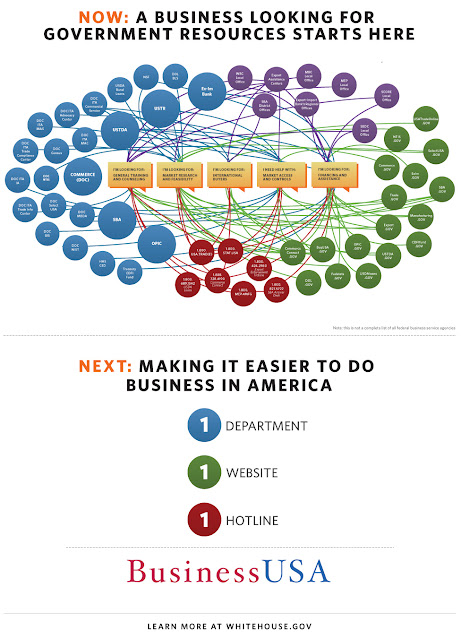 Next we bring you the Bridge to Nowhere Tea Party, a small community organization in Littleton, Colorado dedicated to assisting our government in solving some of the myriad problems facing our nation.

As Citizen Pete, a spokesman for the Tea Party group indicated, "We were inspired by the President's plan to streamline government in a way which would make it easier to do business in America. And we thought, just maybe, there is a way that we can help our President to accomplish that goal."

After a short meeting on the bridge, and a brief review of U.S. laws and the Code of Federal Regulations, the Bridge to Nowhere Tea Party members settled on the newly enacted Affordable Care Act as one area where they could help the President to streamline government.

We are reminded of the example of where businesses like McDonalds, and several union organizations, encountered difficulties complying with provisions in the new Affordable Care law which would have resulted in premature layoffs of employees or cancellation of existing health insurance coverage, prior to full enactment in 2014.

In a number of instances, these small business' and unions found it necessary to contact their members of Congress or the White House in order to obtain waivers from the Secretary of HHS. It is troubling that in this modern era, there are still examples where government bureaucracy can impede the efforts of business' and other organizations seeking to avoid compliance with provisions of an act.

We are greatly encouraged that a citizen group like the Bridge to Nowhere Tea Party is willing to step up to help the President to solve a real problem during these troubled times, despite some of the heated rhetoric which has divided our nation in the past.

Therefore, we commend the Tea Party for their contribution, which was sent to the President today, and is outlined below. We are confident that the President will fully embrace the Bridge to Nowhere Tea Party's suggestion as an example of how we can all work together to make it easier to do business in America.