After reading the disappointing news about how close his suggested slogan came to being selected by the Obama campaign, Russian President Vladimir Putin has apparently reacted in anger, pulling out of the upcoming G-8 Summit at Camp David and his scheduled meeting with President Obama next week.

This story was first broken by FOX News, and has now been confirmed, and details have been added, by PPPS Moscow Correspondent, Pyotr "the Great" Pete.

In a story published by PPPS on Tuesday, May 8 about the Obama Campaign slogan selection process, it was revealed that this slogan idea, FORWARD for FLEXIBILITY, offered in a gesture of international good will by the newly elected President of Russia, was given top consideration, but ultimately rejected in favor of the more simplified campaign slogan, FORWARD. 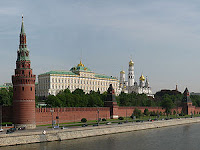 Pyotr Pete's sources inside the Kremlin reported that Putin was furious after reading the PPPS article, and wanted to take more drastic measures, but that cooler heads, including former President Mevedev, prevailed, convincing Putin to send a symbolic message.

Our Chief White House Correspondent, Political Beat Pete, indicates that staff in the White House, the State Department and in the Obama campaign, have been scrambling to counter today's bad news. Sources indicate that the President has dispatched Chief Campaign Spokesman, David Axelrod to Moscow, instead of Secretary of State Hilary Clinton, to try and iron out the problem.

Mr. Axelrod is reported to be authorized to offer up a future Obama campaign stop in Moscow and a private dinner with George Clooney as compensation for Putin changing his mind about the G-8 Summit. However, rumors circulating that the DNC might also be offering a change in the location of Democratic National Convention from Charlotte to a more receptive venue in Moscow or St. Petersburg, could not be confirmed.

We will provide updates as this story unfolds.