PPPS (Washington) Several readers have written asking for more information about CPAC 2012. So here is a collection of small reports and personal stories written by various Pundit Pete Press Service staff who attended the conservative conference in Washington, DC, February 9-11. 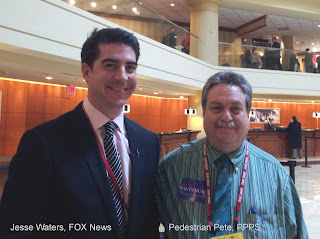 During the CPAC 2012 conference, Pedestrian Pete, the "man-on-the-street" correspondent for the Pundit Pete Press Service, was most often occupied with interviews of Occupy DC protesters on the street outside the conference hotel.

However, during a break in the action, Pete met one of his heroes, Jesse Watters of Fox News and O'Reilly Factor fame in the hotel lobby. Pete was so overwhelmed and at a loss for words, that he forgot all of his interviewing skills, but he was at least able to snag a photograph. Pete said Jesse didn't say much either, no doubt because he was equally overwhelmed to meet Pedestrian Pete.

In a brief moment of professional camaraderie, Political Beat Pete, Chief White House Correspondent for the Pundit Pete Press Service, and Bret Baier, former Chief White House Correspondent for Fox News, and current anchor for the popular Fox News Channel show Special Report with Bret Baier, discussed the declining state of professional journalism.  Both agreed that Fox News and the Pundit Pete Press Service were among the stalwarts maintaining a fair, balanced and professional approach to covering the news.

Pete then went on to compliment Baier for being one of the only truly professional journalists on TV today and thanked him for his great show. Baier, who said he thought he remembered meeting Pete once in the back of the White House press room, returned a similar compliment. During the meeting, Pete was accompanied by Stacy on the Right, one of the classiest bloggers you are ever going to meet, who snapped the historic photo.

As Pundit Pete, Eiditor-in-Chief of the Pundit Pete Press Service, is fond of saying "Good journalism sometimes takes time, which can be a problem in this world of constant deadlines and 24-hour news cycles. However, for some truly important stories, a journalist needs to allow time for the imagination to kick in, so that he can properly embellish a story to meet the standards our readers have come to expect."

So have patience, dear readers, there is more to come.