After a short trip on the Metro, we arrived at the conference center, the Marriott Wardman Park Hotel - the one with the Cain's Solutions bus parked in front.

Citizen Pete, who came along as the winner of our Loyal Reader Award for 2012, was thrilled!

Pundit Pete, while in line to obtain press credentials for the organization, got to meet another Pete, Peter Foster, U.S. editor for the London Daily Telegraph.  (Not saying whether a job offer was made.)

They really take care of the press here at CPAC. Food, beverages, and free internet!

Meeting lots of fellow bloggers. Stacy on the Right (literally) and to my left is Tom White of Virginia Right!

Jim DeMint just got done outlining the conservative case for changing America back, one Senate at a time. Check out his SenateConservatives web site.

"Being an American is a blessing, and it's also a responsibility."

"The greatest thing we can do for the world is, to be America."

Marco Rubio gave an awesome speech. He could go far.

UPDATE: A certain governor from Texas came by Blogger's ROW. He's now speak'n at the podium. 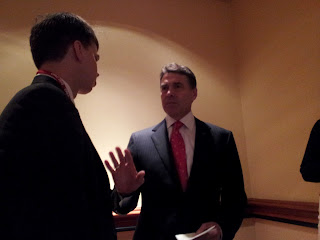 When Governor Perry entered the room, everyone rushed over to meet him. By the time I figured out what was going on, the line was too long, so I went back to my table to blog. When I next looked up, there was the governor, extending his hand to meet me. I shook his hand and gave him my card, then took this pic. He seemed pretty nice, and promised to check out Pundit Pete.


From his speech. "If it's half-time in America, I fear for what will happen if we let this president start as our quarterback in the second half."