Tea Party at Fault in Near-Default and Credit Rating Downgrade

PPPS (Washington) Recent data released by the U.S. Bureau of Economic Analysis supports the claim by many government leaders, such as Senator John Kerry, and independent pundits, such as David Axlerod, who conclude that the Tea Party is responsible for the recent near default by the U.S. government, and for the resulting credit downgrade by Standard & Poors. Our own PPPS Chief Economic Analyst Prognosticator Pete has evaluated the data, and presents his findings, as illustrated by the following graphs. 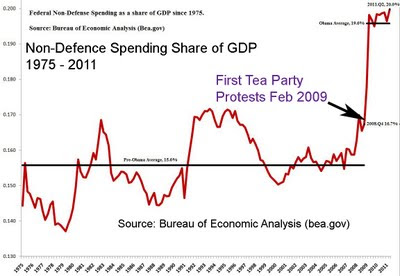 It is clear from this graph that the start of Tea Party movement not only coincides with, but had a causative effect on the uncontrolled expansion of government spending which ultimately led to the recent downgrade in the U.S. credit rating.

Furthemore, the following graph of unemployment, as adjusted to reflect Prognosticator Pete's most recent projections, indicates both a direct correlation between the start of the Tea Party movement and skyrocketing unemployment, and the potentially disastrous future consequences of the "Tea Party Downgrade". 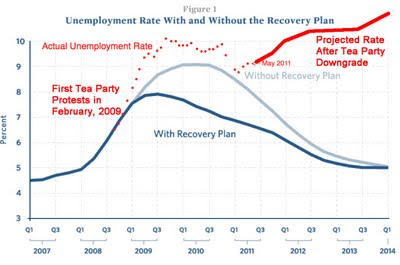 Tea Party proponents, in an attempt to deflect blame and spin their own interpretation of these telling statistics, suggest that the Tea Party movement was actually an early warning against out-of-control spending and not the cause. They also maintain that had their warnings been headed, the credit downgrade could have been avoided.

Our own PPPS survey of leading economists, including top economic advisers at the White House, finds little support for the Tea Party spin. In fact, noted Nobel Prize winning economist and New York Times columnist Paul Krugman, goes even further in disputing the Tea Party claims, "The recent analysis by Prognosticator Pete, while admirable, only suggests a direct correlation between Tea Party activism and our country's economic decline, whereas my own research indicates that the Tea Party's efforts to thwart the President's economic stimulus programs actually constitutes economic terrorism of the highest order, and should be prosecuted accordingly."

Unnamed White House and intelligence community sources are now indicating that the President's skillful maneuvers to keep the Guantanamo Bay detention facility operational, despite public opinion to the contrary,   have in fact been part of a strategic move to counter an anticipated nationwide expansion of dangerous right-wing extremist (terrorist?) Tea Party groups. As one anonymous source indicated, "It is essential that leaders of the movement be rounded up before they can cause further economic damage and interfere with our fragile democratic institutions ahead of the 2012 elections."