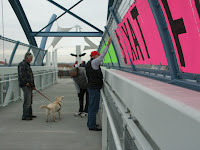 PPPS (Littleton) Prompted by our in-depth investigation into the Bridge to Nowhere protest on Black Friday, the groups responsible have agreed to reimburse Jefferson County for law enforcement costs associated with their radical activities.
Our PPPS investigation indicates that the Jefferson County Sheriff's Office incurred significant costs related to dispatcher time, mileage, and 5 minutes of investigative work for one Sheriff's Deputy to respond to 911 calls reporting free speech activities north of the Wadsworth and Bowles intersection.


After a lengthy internal audit in response to our Freedom of Information Act request, Jefferson County today issued a statement that a total of $17.62 was expended in connection with the Black Friday event. By our accounting, that brings the total cost of the Bridge to Nowhere, including both county and federal government expenditures, to $3,000,018 (rounded to the nearest $1).

Responding to questions from a PPPS reporter, a spokesman for the Jefferson County Sheriff's Office admitted that no lives were lost due to the diversion of dispatcher and deputy time away from other law enforcement duties.

PPPS reporter Progressive Pete, with the Jefferson County cost estimate in hand, confronted one of the purported leaders of the protest, a man identified only as Citizen P, at his suburban home.

When shown the bill for his radical activities, Citizen P responded, "Wow, that's a lot less than we thought it would be. We discussed reimbursement to the county before we even held our protest, and took up a collection at our Bridge to Nowhere Tea Party group meeting last night. With promised matching funds from the For Cryin' Out Loud Foundation, I'm pretty sure we've already got enough to cover the $17.62."

A mysterious women who would only give her name as Citizen C, then came out of the home and said "Please make sure you put in your story something about that nice Sheriff's Deputy. He was very helpful, explained to us about our free speech rights and wished us a safe protest. He also said something about a giant paper weight, but I think he must have meant 'paper work.' I only wish I'd written down his name or badge number, you know, so we could get him a commendation or something."

PPPS will follow up to see if the groups actually follow through on their reimbursement promise. Check back for updates.

In an unrelated story, the Denver Post reported yesterday that the state and local law enforcement efforts associated with the Occupy Denver protest will have cost taxpayers an extra $782,689.